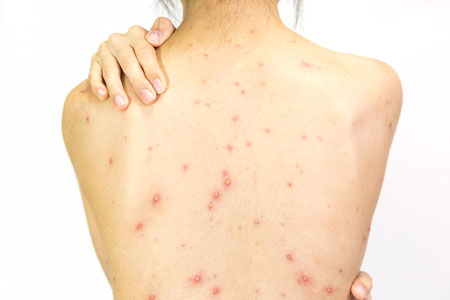 What is chicken pox?

Chicken pox is a very contagious illness caused by a virus called herpes zoster (also known as Varicella-Zoster virus). Over 90% of the population will have had chickenpox by the age of 15, making it a common childhood illness.

What are the symptoms?

Chickenpox begins with a feeling of being generally unwell. You tend to get a slight fever, runny nose and a skin rash. The sores associated with chickenpox begin as small lumps and then turn into blisters followed by scabs. These sores appear over a period of three to four days and may be in various stages of development during the illness.

How is chickenpox spread?

Chickenpox is spread by coughing early on in the illness and by direct contact with skin sores when these appear. Unfortunately people are infectious for one to two days before the rash appears and for about five days thereafter until all the blisters have formed crusts. The period between contact with an infectious person and manifesting the illness is around two weeks but this can be up to three weeks. The good news is people rarely get chickenpox twice.

What are the risks of chicken pox to me if I’m pregnant?

What are the risks of chickenpox to the baby?

How can I prevent chickenpox?

Anyone with chickenpox should avoid others until at least 5 days after the onset of the rash (when all the blisters have crusted). Pregnant women should avoid contact with people with chickenpox. If you have been exposed to chicken pox and are pregnant, or have just had a baby then talk to your health professional as soon as possible after the exposure in order to minimise any risks.

A vaccine is now available for women planning a pregnancy who have not had chickenpox before. The vaccine involves two injections one to two months apart. You should not become pregnant until one month after you have received the second dose of the vaccine. If you are unsure as to whether you have had chickenpox you can get your midwife or doctor to do a blood test to see whether you are immune. Even adults with no history of chicken pox have a chance of being immune (due to a past mild infection).

What if I have been in contact with someone with chickenpox?

Call your midwife, doctor or hospital immediately if you have been in contact with someone with chickenpox. You can have a blood test to see if you are immune to chickenpox. If you have no history of chickenpox in the past then having an injection called Zoster immunoglobulin (ZIG) within 72 hours of exposure to the disease has been shown to prevent or reduce the severity of chickenpox.

What if I think I have chicken pox?

If you think you have chicken pox then ring the hospital talk to your health professional. DO NOT COME TO the hospital if you think you have chicken pox as you could infect other people. If you have children with chickenpox KEEP THEM AT HOME to prevent then infecting others. If you are about to have your baby (in the next seven or less days) or have chicken pox and a new baby under 28 days old then the baby should be given the ZIG injection. This is because the baby has not had the benefit of your antibodies that can protect it and this puts them at risk of neonatal chickenpox. Babies who have been given ZIG will be followed up closely.