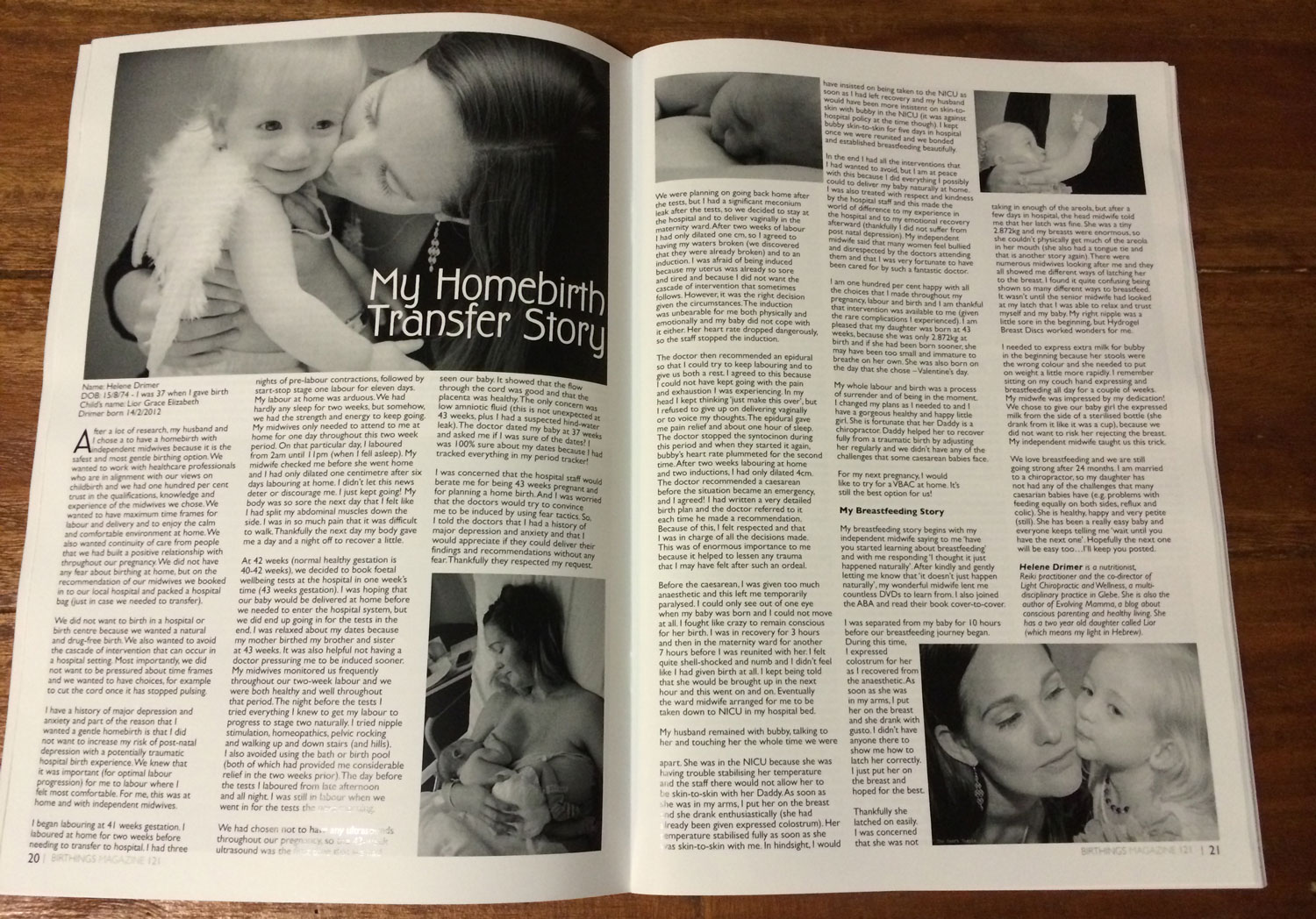 Here is our story. I hope that it may bring some comfort to other women who have had a similar birthing journey.

After a lot of research, my husband and I chose a to have a homebirth with independent midwives because it is the safest and most gentle birthing option. We wanted to work with healthcare professionals who are in alignment with our views on childbirth and we had one hundred per cent trust in the qualifications, knowledge and experience of the midwives we chose. We wanted to have maximum time frames for labour and delivery and to enjoy the calm and comfortable environment at home. We also wanted continuity of care from people that we had built a positive relationship with throughout our pregnancy. We did not have any fear about birthing at home, but on the recommendation of our midwives we booked in to our local hospital and packed a hospital bag (just in case we needed to transfer). We did not want to birth in a hospital or birth centre because we wanted a natural and drug-free birth. We also wanted to avoid the cascade of intervention that can occur in a hospital setting. Most importantly, we did not want to be pressured about time frames and we wanted to have choices, for example to cut the cord once it has stopped pulsing.

I have a history of major depression and anxiety and part of the reason that I wanted a gentle homebirth is that I did not want to increase my risk of post-natal depression with a potentially traumatic hospital birth experience. We knew that it was important (for optimal labour progression) for me to labour where I felt most comfortable. For me, this was at home and with independent midwives.

I began labouring at 41 weeks gestation. I laboured at home for two weeks before needing to transfer to hospital. I had three nights of pre-labour contractions, followed by start-stop stage one labour for eleven days. My labour at home was arduous. We had hardly any sleep for two weeks, but somehow, we had the strength and energy to keep going. My midwives only needed to attend to me at home for one day throughout this two week period. On that particular day, I laboured from 2am until 11pm (when I fell asleep). My midwife checked me before she went home and I had only dilated one centimetre after six days labouring at home. I didn’t let this news deter or discourage me. I just kept going! My body was so sore the next day that I felt like I had split my abdominal muscles down the side. I was in so much pain that it was difficult to walk. Thankfully the next day my body gave me a day and a night off to recover a little.

At 42 weeks (normal healthy gestation is 40-42 weeks), we decided to book foetal wellbeing tests at the hospital in one week’s time (43 weeks gestation). I was hoping that our baby would be delivered at home before we needed to enter the hospital system, but we did end up going in for the tests in the end. I was relaxed about my dates because my mother birthed my brother and sister at 43 weeks. It was also helpful not having a doctor pressuring me to be induced sooner. My midwives monitored us frequently throughout our two-week labour and we were both healthy and well throughout that period. The night before the tests I tried everything I knew to get my labour to progress to stage two naturally. I tried nipple stimulation, homeopathics, pelvic rocking and walking up and down stairs (and hills). I also avoided using the bath or birth pool (both of which had provided me considerable relief in the two weeks prior). The day before the tests I laboured from late afternoon and all night. I was still in labour when we went in for the tests the next morning.

We had chosen not to have any ultrasounds throughout our pregnancy, so the 43-week ultrasound was the first time that we had seen our baby. It showed that the flow through the cord was good and that the placenta was healthy. The only concern was low amniotic fluid (this is not unexpected at 43 weeks, plus I had a suspected hind-water leak). The doctor dated my baby at 37 weeks and asked me if I was sure of the dates? I was 100% sure about my dates because I had tracked everything in my period tracker!