For an unplanned pregnancy, we were certainly surprised when we discovered two little beings on the first ultrasound. We had initially planned a homebirth, with our midwife who had supported us at our daughter’s birth at home one year ago. However due to the increased risks associated with twins, we decided to opt for a hospital birth. Having birthed my first two children in hospital I held many reservations around birthing in this environment.

I also had the privilege of attending a friend’s twin delivery several years ago. Although my friend was essentially happy with the outcome of her birth, I wanted to avoid what I came to discover as “standard hospital procedure” for a vaginal twin delivery. I did not want to be given an ultimatum between an epidural and a caesarean; I wanted neither. I did not want the room full of unnecessary hospital staff eager to witness the unfortunately rare vaginal delivery of twins. I did not want to be confined to the bed, unnecessarily monitored, or have the second twin extracted by the doctor immediately after the first twin’s delivery. I needed to ensure that any intervention was ABSOLUTELY necessary, and not in the same context that hospital staff can portray as necessary, when in fact they are acting in their own best interests, not that of myself and my children.

To achieve my desired birth outcome, would require much planning, discussion and negotiation. In fact the most important part of my birth was the preparation. My midwife had an excellent working relationship with an Obstetrician who had significant experience in vaginal twin births. My midwife recommended we seek the obstetrician’s joint care for the birth. I hoped the obstetrician would be open to our views and requests and help us achieve our desired outcome. However we needed to do our research and with our midwife’s assistance my husband and I became well educated in the finer details of vaginal twin birth and all its possible variants. Unfortunately there was a lack of research in the area and therefore no research to support the standard procedure adopted within the hospital system.

My midwife, obstetrician and I had several meetings to discuss the birth, which I felt challenged his comfort zones somewhat, requiring some negotiation and compromise, but in the end I was happy with his assistance and the birth plan we had agreed on. However, to complicate things, one or both twins remained in a breech position towards the end of the pregnancy. This created further reading, discussion, negotiation and revising of our plan. Fortunately our obstetrician also had extensive experience with breech births and was heading a Breech Clinic within Westmead Hospital.

Although I knew women are designed to give birth to babies in a breech presentation, and had witnessed the naturalness of this myself during my friend’s twins birth, I still held some fear of my impending birth. I felt this was preventing me from going into labour, so flicked through a book my midwife had loaned me on Breech birth. The visual imagery of women birthing breech babies helped me face my fear of delivering a bottom or two, and several hours later I was on my way to hospital. 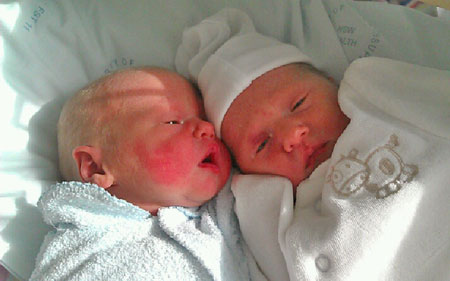 After much discussion, planning and negotiating, Molly and Claire arrived at 3:10am and 3:37am respectively on 17th Dec 2011 – both breech!! Molly arrived shortly after our arrival, too fast for the obstetrician, but gratefully caught by my midwife. Molly’s speedy arrival definitely contributed to the ease of her birth. However, I believe our extensive preparation contributed to the success of Claire’s birth. Being the second twin, we had many concerns about the extent of intervention that could occur during her birth. I had previously agreed to having my membranes ruptured in order to determine her presenting part. This was to assist obstetrician to minimise any risks that may be associated with potential presentations. Fortunately Claire’s bottom presented and I was left to give birth to her unimpeded, in a standing position. Our preparation had paid off and with the help of my midwife and obstetrician, I had achieved a natural, vaginal birth, with minimal intervention and maximum safety to my children.

The breech book said that a full term baby’s bottom and head were an equal size, however at 37 wks I felt that Molly’s head was bigger than her bottom and it seemed my easiest delivery yet. So I paid close attention to Claire’s delivery which felt the same, confirming for me that in my experience, the breech position was far easier to birth than vertex. Two of my three previous children were a very similar size to the twins. 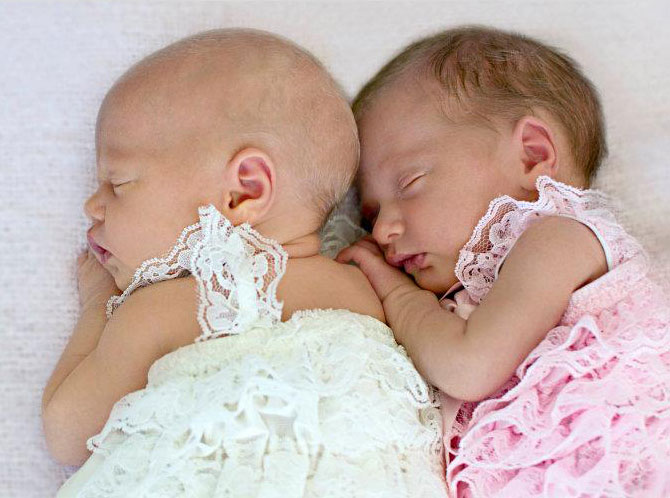