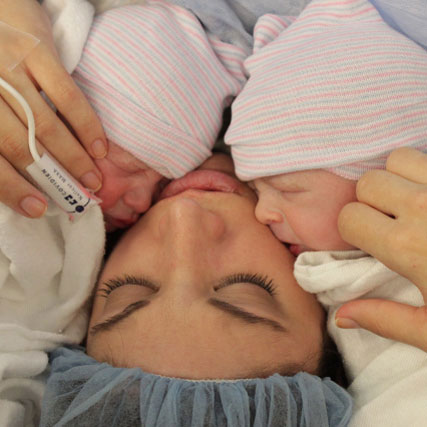 Went in for my ultrasound at 37wks + 6days. Still a ton of fluid with E and he was still transverse.

The previous 2 nights I had terrible pain in my lower belly and a total of 4hrs sleep for both nights. I was exhausted and that didn’t make for a very feisty Me. I also had plenty of pressure from family members that were pushing me to fall in line with Dr L’s plan. This is the part that is really hard for me to come to terms with.

I agreed to a caesarean section.

Dr L once again agreed to the “gentle caesarean” which we went over the elements that were important to me. 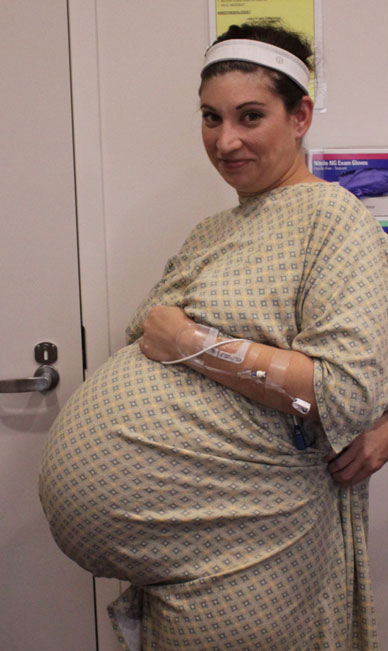 All of these were agreed upon. IV was placed in my non dominant hand, and I waited on the anaesthesiologist. Her nurse came in and I had a little giggle that he looked just like Alton Brown from the Food Network. Now Alton Brown has a ton of personality, and this guy had negative personality. I was terrified of the epidural and he made no attempt to make me more comfortable. After he spent 15min annoying me by being himself, I asked that the epidural be removed immediately following the surgery. The thought of recovery with something sticking out of my back gave me a shiver. He rolled his eyes. The anaesthesiologist came in and I told her that I wanted my doula in the room to take pictures. My hubby would be busy helping me hold babies and wouldn’t be able to take pics too. It takes about 30min to “put everything back in” and I didn’t want to not have pics of the first 30min of their life! She said no, the room is too small, blah blah, too many people, blah blah. So I said “that’s fine, I can sit in this room all day”. Ok, so there was a tiny bit of feisty Christy left. She looked a little stunned and once again said no, I repeated my new mantra “that’s fine, I can sit in this room all day”. She agreed that once the babies were out, that my doula could come in, I took the compromise.

I headed into the OR, and it was HUUUGE (small room, my ass). I sat on the edge of the table with my back curved like a C and told to hold still. They knew my fear of needles, but didn’t take me seriously. Fools. The nurse holding me thought that a good topic to talk about to distract me would be working out. That is the last thing I want to talk about, but whatever. At least she tried. The numbing meds hurt like hell going in and that was when the room started to spin. They had just finished placing the epidural when I lost consciousness. Fun. I was laid on the table and opened my eyes just in time to see the curtain go up. That left the only thing to look at was a small portion of the ceiling and Alton Brown. Barf. Then my fabulous hubby was let in and I was never more glad to see him.

The next few minutes were the oddest in my life. I could hear the doctors and nurses talking about their latest vacations, somebody’s new pet and not once was I addressed. I just kept expecting them to ask where we had vacationed last or how many dogs we still have. Nothing. So I kept asking “sooo, what’s going on over there” and the response was “still going through layers”. Then they would continue on with their conversation. They do this all day everyday and forget that this is a momentous, once in a lifetime occasion for us. They don’t think of how terrifying it must be to be stuck on a table, naked, with the epidural making it so I can’t feel my chest and I’m wondering if I’m still breathing. How much one needs to be reassured that everything is going great, as you hope and pray that your babies will be ok.

Then the moment came, I heard him before I saw him. I was showed E over the top of the curtain. He was gorgeous and fat and full of life. Thirty seconds later he was handed to a nurse. I was confused. I said “I thought we were doing delayed cord cutting” – she said “we did”. I assumed that she forgot and she would remember to do it with M. Two minutes after E came into this world, M was out, screaming, and was promptly handed to a nurse. I’m guessing they weren’t “walked out” and I know the cord cutting wasn’t delayed and I KNOW they weren’t handed to me first thing. Seeing and hearing my boys on the other side of the room coupled with feeling violated – a feeling so instinctual came over me. I needed MY boys, and all I could do about it was reach for them and beg for them to leave them alone, not to clean them, and to bring them to me. I was ignored. My hubby was over with the boys as they were cleaned up, weighed, measured and swaddled. By the time they were brought to me, the only skin to skin that was possible was their cheek on mine.

I am so glad that I fought to have my doula in the room to take pictures. This picture is so precious to me. I had come to terms with the possibility of a c-section weeks before, but this was something I wasn’t prepared for. If Dr L couldn’t or didn’t want to do the gentle cesarean, then she should have said so. But she didn’t, she wholeheartedly agreed – and then she lied to me. My own guilt also plays into this. This wasn’t a life-saving surgery that I agreed to. Recovery has been terrible, haven’t been able to even help take care of my boys. My hubby had to take care of me AND the boys – but that is another post all in it’s own.

Mom of one daughter, wife to the most amazing husband. Homeschooler, part-time crunchy, lover of food & the internet. I breed Chihuahuas and occasionally take them into the show ring. I’m also pregnant with twin boys! Here is Christy’s blog lifeplustwins.wordpress.com