Vasa Previa and Me 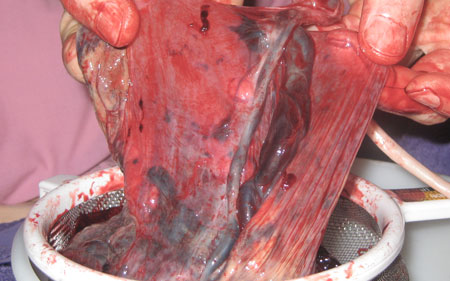 Vasa Previa is a rare complication in pregnancy where unprotected blood vessels run across the cervical os. If the blood vessels rupture during labour, or are compressed during birth, consequences for the baby can be rapid and severe. Claudia Phares talks to Katharine Gillett about experiencing Vasa Previa and the care and support she received from midwives

It has been seven months since I went into labour with my daughter. I remember feeling excited but nervous about what was to come. I was hoping for a natural birth as it was my first baby, and I had no idea what to expect. The birth certainly didn’t go as I’d imagined. However, now I can look at my beautiful daughter playing on the floor and reflect on how much the care and support from everyone involved helped me come to terms with our experience of Vasa Previa.

I originally came to Australia in 2005 from Montreal on a working holiday visa. I was working as a nurse when I met my husband in Darwin. He was working at the hospital and we met one night. I knew immediately that I wouldn’t be going back to Montreal any time soon. We moved in together in Melbourne in 2007 and started trying for a baby about three years ago. We decided that if I turned 35 and I wasn’t pregnant then we would try IVF, which is eventually what we needed to do. We were lucky enough to be successful on our first round, and my pregnancy began.

I had a good pregnancy apart from the usual fatigue and sickness, but I had a good support network with our friends and my husband’s family. I was studying for a Fine Arts degree throughout my pregnancy which kept me busy, but by the end I was ready for the baby to come.

I was 40 weeks and two days when my waters broke and we headed into the hospital. I was pleased I had avoided an induction; I really wanted to do it naturally. Unfortunately it didn’t quite happen like that and after six hours and no contractions I was offered augmentation with the syntocinon drip and I agreed. About an hour after the drip started, I bled suddenly and they couldn’t find the baby’s heartbeat. I clearly remember speaking to the midwife who supported me in labour. She was very honest. I just kept bleeding and bleeding and when I asked her, “Is this normal?” she looked me in the eye and said, “No.” Things happened quickly from there and I was rushed to theatre for an emergency caesarean. I had to have a general anaesthetic so the last thing 1 remember is counting backwards from 10. Then I woke up without my baby. At this stage we still didn’t know what had gone wrong. We just knew that bleeding had occurred and there had been a lot of it. I found out later that my baby was without oxygen for 13 minutes. Immediately after the caesarean, she was resuscitated with CPR and intubated, then immediately transferred to another hospital where they had a neonatal leu for hypothermic treatment. She was in an induced coma and cooled for three days. Other than the paramedics briefly wheeling her past me on the way out, I wasn’ t well enough to travel to see her for two days.

I remember waking up in the recovery ward, out of my mind with painkillers, and my husband leaned over and whispered, “She barely made it,” but I knew she was alive. It was so far beyond what I expected that I just gave in. I didn’t know how to tackle it: one minute you are pregnant, the next minute you are not sure if your baby will survive.

She only just made it through. The doctors prepared us for possible brain damage because she was without oxygen for so long. But by that time my husband and I were accepting of anything that might happen: we were already in love with her.

It was hard being in the hospital away from my husband and baby, but I’m so glad I stayed. The midwives talked to me all the time, explained about expressing breast milk and sat with me while I cried. They gave me pain relief and took care of me, but the biggest thing was the time they gave me, talking to me. All the midwives knew I didn’t have my baby and they could recognise my pain, sadness and frustration. The midwife who had been with me when I started bleeding came to see me each day in the hospital. She had come with me to theatre and had witnessed the birth. It was important for me to know that because my husband wasn’t allowed in the theatre. The midwife was also quite distressed by the event as she had never seen Vasa Previa before. Talking to her helped me a lot, as I was worried that I had lost the opportunity to bond with my baby and she reassured me I could bond afterwards. That I could make up for everything when I could hold my baby skin to skin. I spent most of the time in hospital expressing my breast milk. I was determined I would feed her when the time came.

This was the most difficult time my husband and I had ever experienced, but it was also a beautiful bonding time. I look back on that now. My little family was separated but we instantly shared an unconditional love. The experience pulled a lot out of us as we saw each other at our most vulnerable. That is always something I will remember about that time: our shared love.

I just couldn’t wait to tend to my daughter. My own physical recovery was OK. It was secondary to my baby’s needs, but I knew it was really important that I didn’t overdo it. I actually ended up being readmitted with UTI from the catheter but my wound was fine and physically I got stronger each day.

Now my daughter is seven months old. The MRI showed no significant brain damage. She is rolling, cooing, breastfeeding, chatting and smiling. It is so beautiful to watch. Despite everything that happened, I feel incredibly lucky.