I was five days overdue and I’d been having what I thought were mild contractions on and off all day. By 4:30pm they were about 15 to 20 minutes apart. I rang the labour ward at the hospital and was told to stay at home until the contractions were four to five minutes apart. When I explained to the midwife that I lived 30 minutes from the hospital and asked if I should come in sooner just to be safe, I was told just to hold out.

I was chatting to Judy, my neighbour, on the Internet at about 5:30pm, and when I told her about what I thought were contractions, she ran over to see me. By now they were about six to seven minutes apart and getting more intense so Judy rang my husband, Keith, and the ambulance. They both arrived around 6pm and my waters broke on the kitchen floor five minutes later. By this stage my contractions were three minutes apart so the ambos decided to lay me down to check everything out – they then realised I was about 7cm dilated. They suggested we get in the ambulance and head to the hospital but I said, “I’m not going anywhere – I’m not having him on the side of the road!”

After 40 minutes and about seven or eight pushes, Harley Andrew was born on our bed at 7:10pm. He was healthy and alert right from the start scoring an excellent nine and later a ten on his APGAR tests. He only gave a little whimper when he was born and didn’t cry until he had his needles at the hospital. I delivered the placenta an hour later on the way to the hospital. I came away with a second-degree tear and the only pain relief I had was a few puffs on the inhaler given to me by the ambos!

The ambulance took me to the hospital to stitch the tear and check the baby over. He was a very healthy 8lb 5oz, 53cm long with a 35.5cm head circumference. Keith and Judy said they were so proud of me and the ambos couldn’t believe how fast it all happened being my first baby.

I know I am very lucky to have had such a quick labour and I can’t thank my husband, neighbour and the ambos enough for their support. I have to admit, I’m EVER so glad I didn’t try the castor oil trick! 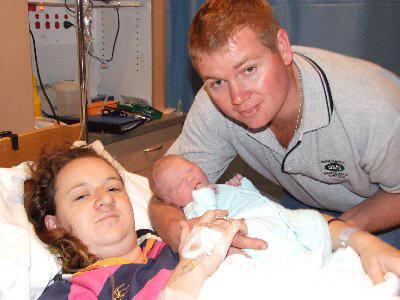 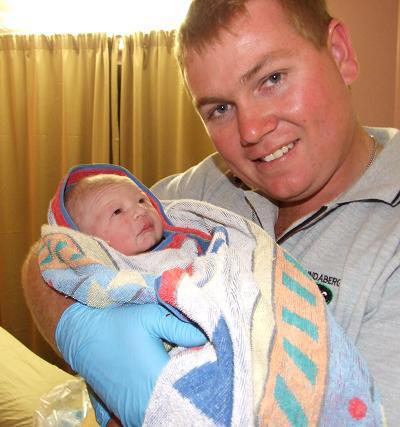