Call the Midwife by Jennifer Worth 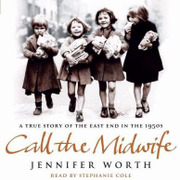 On a cold wet day in the Isle of Skye in 2008, I picked up the book, Call the Midwife. A woman browsing the shelves near by, saw it in my hands and said, “oh no! Not that book.” She proceeded to tell me how her sister-in law did not talk to her family for an entire week while reading it, as she found it so gripping. With a title like Call the Midwife it was no wonder I had picked it up. However, when I found out it was written by a district midwife working in the London Docklands at a similar time to my own mother, I was gripped.

This is a delightful book, full of stories of struggle and surprising humanity in London’s poverty stricken East End in the 1950’s. Jennifer Worth introduces us to her life as a midwife at the age of 22, living and training with the Midwives of St Raymond Nonnatus. The nuns are delightfully human, the dockers tough, the prostitutes desperate, but it is the women who give birth to baby after baby in squalor and cramped conditions, often with no running water and an entire family crowded into one room, that are the real heroes in the book.

The story of Spanish Conchita who spoke no English and was married to a man who spoke no Spanish, was truly delightful. Her 25th baby arrived at 28 weeks gestation after a serious fall and no flying squad was going to separate her from her precious child. The story of how Conchita nestled the baby between her warm breasts at home and fed her drops of breastmilk every hour is truly beautiful. The story of the young, rough cockney lad who helps a great giant of a midwife learn to ride a bike so she can work in the district is touching, especially when you find out he became Princess Dianna’s bodyguard.

Perhaps the most gut-wrenching story is about Mrs Jenkins who appeared outside the house after the births in the Docklands and grabbing the midwives sleeves would enquire anxiously, “Ow’s ve baby? Ow’s ve li’le one?” Dismissed by many as a bothersome old woman, the unfolding story of her life simply breaks the heart.

I think what amazed me most was how birth at home was considered so normal and the thought of going to hospital for many was unthinkable. What touched me most about this book was being able to have a glimpse of the life my mother must have known as she cycled around the East End of London on her big black bike, stopping at her favourite fish and chips shop to keep the cold out. The only story she ever really told me was how her first home birth as a student midwife ended up being undiagnosed twins. As I read this book I felt I went on a wonderful journey with my mother.