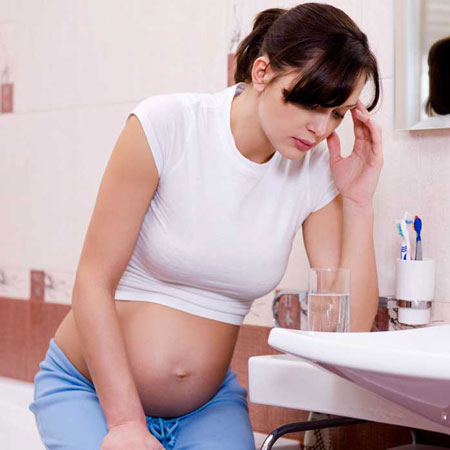 Hyperemesis Gravidarum HG is characterised by persistent vomiting and severe nausea. The woman suffering from HG is unable to maintain adequate hydration and fluid, electrolyte and nutritional status are jeopardised. Dehydration, ketonuria, electrolyte imbalance and a body weight loss of greater than 5% of pre-pregnancy weight characterise HG. Onset is always in the first trimester, usually 6 to 8 weeks, and tends to re-occur with subsequent pregnancies. HG occurs in around 1:100 pregnancies.

HG is associated with raised thyroxine levels or suppressed TSH levels and HCG. Helicobacter pylori eradication has been reported as resolving intractable NVP. Once again there is no good evidence to support psychological and behavioural theories with HG.

There are several serious complications that can result from HG. These include:

If outpatient management is not effective for women suffering from HG then hospitalisation may be warranted. Intravenous fluid and electrolyte replacement, thiamine supplementation (Vitamin B1), use of conventional antiemetics and psychological support are the mainstays of management.

If the woman is ketotic and unable to maintain hydration then they should be admitted to hospital.  Fluid and electrolyte replacement with Normal Saline or Hartmans with potassium chloride added should be considered.

CAUTION: Do not use dextrose containing fluid as this can precipitate Wernicke’s encephalopathy and will not correct hyponatraemia. Do not use double strength saline as can lead to central pontine myelinolysis.