The pregnancy journey and the homebirth of Sienna Jane

There was a lot of joy on the morning I confirmed my pregnancy with Sienna. Craig and Jasmine were still snuggled up in bed when I snuck out to the bathroom to do the test, so it was lovely to announce that I was pregnant to both of them and enjoy a few moments together soaking it all in. Jasmine declared that she also had a baby in her tummy and seemed very excited for both of us! 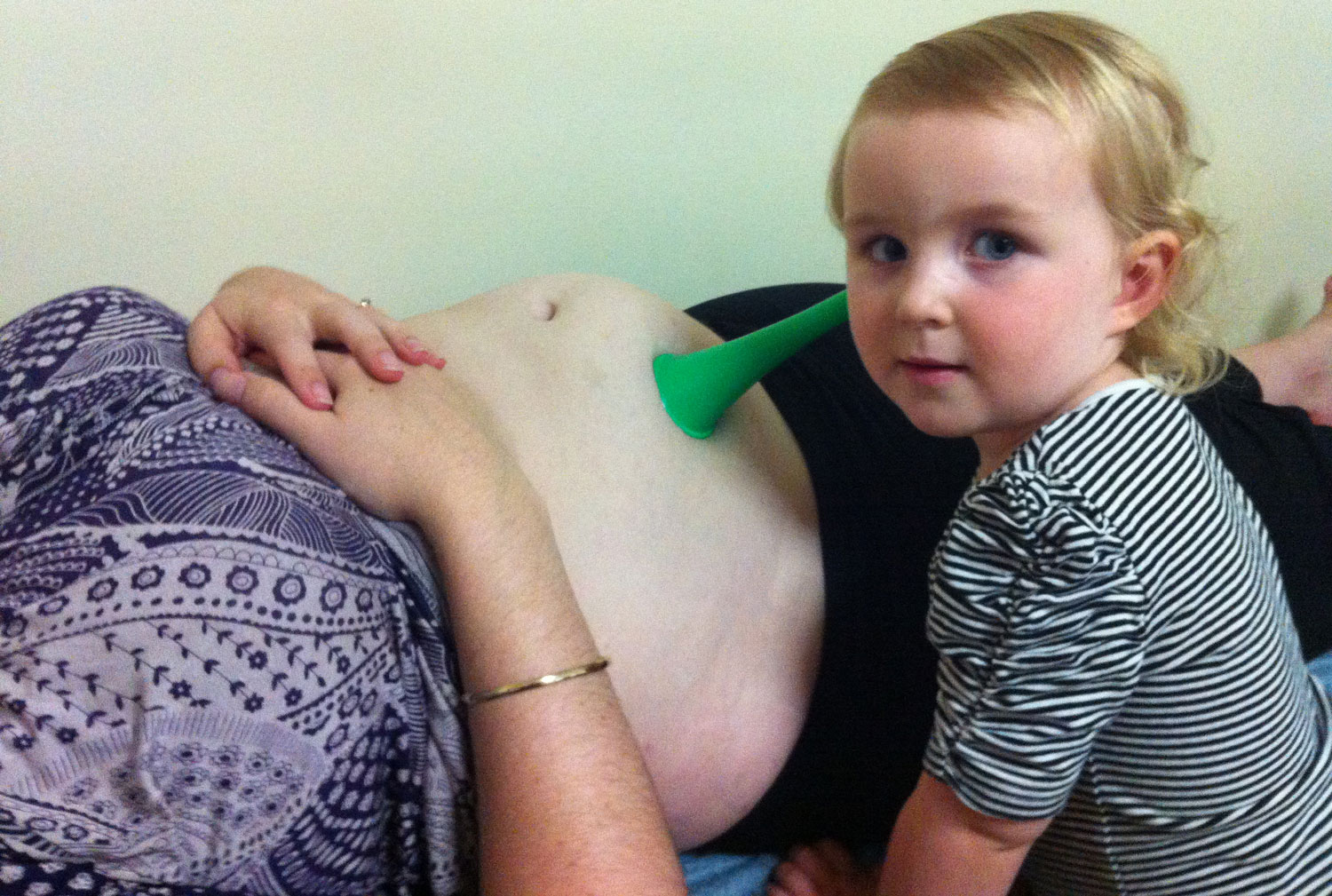 My pregnancy with Sienna proved to be very challenging; I was sick with adrenal fatigue during the final months of the pregnancy, while still trying to work part-time and look after three year old Jasmine. I was lucky to have a very understanding boss (who was also my midwife) and supportive husband who helped me when I was so unwell. I finished up at work a month earlier than planned, and there were many weeks spent resting on the couch unable to do much at all. This was very frustrating to me as I like to keep busy, and we usually get out of the house most days, but I could only cope to be on my feet for an hour or two at most so going out was exhausting.

I was fortunate to have a great chiro/osteo who had diagnosed the adrenal fatigue in October when all my blood tests showed up normal. I saw him weekly for acupuncture and took several supplements a day to treat the fatigue. I also started taking a stronger iron supplement around Christmas time and by mid-January I finally started to feel more normal! My energy increased and I was able to slowly start doing more each day.

I had a beautiful blessingway surrounded by loving friends and finally felt able to start focussing on the birthing journey I was soon to take. My midwife painted henna on my belly, friends shared inspirational stories and we feasted on yummy food. It was a day of nurturing that was just what I needed.

At 40 weeks my friend Anna came over and did a belly cast for me, then I spent the next week and a half nesting and waiting. I seemed to alternate between feeling very huge and over it one day, to feeling quite peaceful the next day. I expected another 42+ weeks pregnancy so decided to settle in and wait.

On the day of Sienna’s birth, Jasmine and I pottered around the shops in the morning, and then went to a friend’s 1st birthday party late morning. I felt relaxed, and really enjoyed spending the day with my friends and our kids at the party. We came home mid-afternoon and watched some TV.

It was around 6pm that I noticed I’d been having some Braxton’s for half an hour that felt quite regular but only mildly sore. I wondered what time Craig would be getting home from work but decided not to call him as it would probably be soon. He walked in the door about 15 minutes later and I let him know what was going on. He decided to start getting things setup for the birth and called my midwife to let her know things were starting up. Jasmine’s birth had been 3 ½ hours so we figured it would probably be another quick labour. I had to stop and breathe through the contractions by this time but they were still not really painful, and Craig noted that they were coming about 6 minutes apart.

At around 7pm I sent a message to my friend Anna to let her know I was in early labour and that I would call her if I needed her to come and look after Jasmine. I also sent a message to some family and friends to tell them I was in labour so they could light their candles and be thinking of us.

I made a few trips to the toilet, and then thought I should get dinner ready for Jasmine. Jasmine was very excited and running around, but it was difficult for me to focus on much at all. I had put the pasta on the stove but have no idea when it was finished or served up!

It was not long after that I was getting really distracted by Jasmine, but still not in much pain. Craig had started to fill up the pool and was trying to keep Jasmine occupied but her chatter was annoying me. I called Anna and asked her to come over, and then I retreated to the main bedroom to put on some music and lean over my fit ball on the bed. I sang along to Missy Higgins between contractions, and at this point I needed a heat pack on my lower belly as it was starting to become more intense. They were now about 4 minutes apart.

Anna arrived not long after, so I went out to the lounge room to let her know how it was going. With each contraction I had to stop and kneel beside the couch, and she would press firmly on my lower back which relieved a lot of the pressure. She had brought a craft activity for Jasmine which was now keeping her busy and quiet. Anna suggested we call my midwife as it was all happening quite quickly now. Craig rang our midwife and asked to her to come, and to let our second midwife know as well.

I really needed to do a poo and wanted to do it before I got in the pool, but sitting on the toilet was too painful. I suggested to Craig to help me squat over the potty instead and I was greatly relieved to feel it come out, and at the same time felt a big pop as my waters broke and gushed out.

Not long after that the pool was ready so I hopped in. I had wanted it really hot this time, as for Jasmi