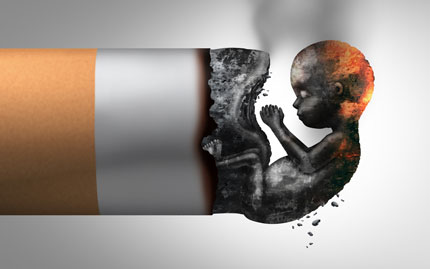 We know more and more these days about the effects of cigarette smoking on pregnancy. For instance did you know that cigarette smoke contains 2000 components. Some of the most harmful for pregnant women and their babies is thought to be nicotine, carbon monoxide and cyanide. These substances have been found to cross the placenta and reach the baby.

One of the most concerning effects of smoking during pregnancy is that the baby’s growth is restricted. A baby of a woman who smokes weighs on average 170 to 200 grams lighter. The more a woman smokes the greater the weight reduction. Having a smaller baby is not a positive thing. A smaller baby does not mean that the birth will be easier. The reason babies are smaller is that cigarette smoking restricts blood vessels therefore reducing the amount of nutrients and oxygen reaching the baby. This leads to a lower birth weight and a baby more prone to becoming ill after birth.

Research has found that potential effects of smoking during pregnancy include an increased chance of genetic abnormalities. There has been associations made between pregnant women smoking and increased chance of cleft lip, cleft palate, problems with bowel, eyes, ears and spinal cord. There are also increased abnormalities found with the placentas. The effects of smoking goes beyond the birth. There have been links made between women smoking during pregnancy and their children developing respiratory problems, such as asthma, later in childhood.

The health benefits for stopping smoking are immense, this particularly true for pregnant women. Women need support to stop smoking from their families and from health professionals.

I am finding it difficult to stop smoking. I have managed to reduce the amount I smoke, will this have a positive effect?

You are not alone. Around 20 per cent of pregnant women smoke. Of these women, over half smoke more than 10 cigarettes per day. Only about four per cent of women who smoke manage to stop smoking in the second half of their pregnancy. It is known that if you are able to stop smoking in the first half of your pregnancy, that by the time of birth the baby will be close to normal size.

However there is no safe level of smoking. Woman are encouraged to quit. Even reducing the amount of cigarettes smoked, still exposes the baby to harmful substances. But if you find that you are unable to stop smoking completely – it is important to remember ‘the less you smoke, the less effects on the baby’.

Can smoking affect my pregnancy?

Yes, smoking can affect pregnancy. Smoking increases heart rate, increases blood pressure and depresses the nervous system. This not only effects the baby but causes increased complications for the mother. The increased rate of chest infections and blood clotting disorders is of particular concern.

Where can I get help to stop smoking in pregnancy?

We know it is very difficult to stop smoking. Discuss your concerns regarding smoking during pregnancy with your midwife or doctor. They should be able to provide you with information and support about quitting. You can also call the Quitline on 131 848. They can send you a quit package or put you on to a specially trained counsellor for support.I have heard that smoking can cause SIDS?

The evidence is fairly clear on this point – the risk Sudden Infant Death Syndrome (SIDS) is increased if the mother smokes during her pregnancy. There is also evidence to show that if the father smokes while the mother is pregnant, SIDS also is increased. Ideally both parents would stop smoking during pregnancy, but the less you smoke the less the risk of SIDS.

After birth it is important to keep babies in a smoke free environment. Stop people from smoking in the house, car or anywhere near the baby. By following these simple steps it helps to reduce the incidence of SIDS. For more information contact your midwife, doctor or National SIDS Council of Australia.