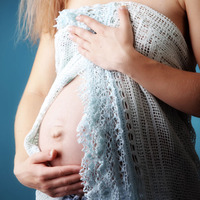 The second trimester is a period of rapid growth for your baby. By 18 weeks of pregnancy the baby will weigh around 200gms and be approximately 14cm long. The body now grows more rapidly than the head, so the baby seems more in proportion. The legs will have also lengthened and the skeleton begins to harden. The eyes, which were more to the side of the head, will be facing forwards. The ears now clearly stand out from the head. The baby will become increasingly active, turning its head, opening and shutting its mouth and even breathing under water.

At 22 weeks of pregnancy the mother’s uterus will be just level with or above her navel and she will be finding it hard to do up her jeans. The baby can now partly defend itself against infection with its developing immune system. Head hair begins to appear around 22 weeks of pregnancy and fine hairs called lanugo will cover the body. A greasy protective material known as vernix covers the skin. This will help protect it from damage. If the baby is a boy the testes will have already begun to descend. Little girls will have now formed the 5 million ova that they will have throughout their lives.

At 26 weeks of pregnancy the baby will be around 23cm long and weigh around 820gms. The chance of survival is quite good now. Fingernails will now be present and eyes and eyelashes are usually recognisable. The baby gains a lot of weight during the next few weeks and they are increasingly better proportioned. The eyes will also reopen during this time. The baby now reacts to light and sound. Special cells in the lungs begin to secrete a substance called surfactant that helps to keep the lungs open and able to absorb oxygen. The chance of survival increases now with each subsequent week of pregnancy.

At 29 weeks of pregnancy the baby weighs over a kilogram. The chances of the baby surviving if it is born now are around 90%. Their lungs are much more prepared to breathe air and their central nervous system has now matured to a stage where it can maintain more rhythmic breathing and control body temperature. The baby may now have a good head of hair. The skin will not be as wrinkled, as fat is being laid down, smoothing the wrinkles out.

Changes in your body

Most women find the second trimester of pregnancy easier than the first as the symptoms of nausea and tiredness ease. But ligament pain and shortness of breath can make life uncomfortable. The breasts continue to enlarge and women should be fitted for a maternity bra. At around sixteen weeks onwards women may leak milk from their breasts. Their nipples become darker and more prominent, with little ducts appearing around them on the areola. Women can also now get a faint brown line up the middle of the abdomen (linea nigra) and brown areas of pigmentation on their face (chloasma). These fade away after the birth.

This is a particularly magical period for the mother as she begins to feel her baby move. The first movements, called ‘quickening,’ feel like bubbles or flutters in the uterus. Whilst the baby will have been moving for several weeks it takes longer for the movements to be felt. First time mothers will generally feel the baby’s movements a couple of weeks later (18-22 weeks) than mothers having subsequent babies (16-18 weeks).

By the second trimester you will have booked in for your antenatal care. You will be having antenatal visits every 4 to 6 weeks. At these visits your midwife or doctor will talk to you about your pregnancy and your baby’s movements and want to know how you are. They will take your blood pressure, feel your abdomen, measure the baby’s growth and listen to the baby’s heart rate at each visit.

At 18 to 20 weeks many women choose to have a routine ultrasound to detect any abnormalities and find out where the placenta is lying. You can ask about the sex of your baby during this ultrasound, but remember it is not always possible to tell. If you choose to have an amniocentesis this is done between 15 and 19 weeks.

At around 28 weeks of pregnancy another series of blood tests may done – the particular tests will depend on your individual situation (see table below). If you have a negative blood group you may be offered an injection of Anti D to counteract any antibodies that may develop. If your blood tests indicate anaemia is developing, you will be advised to take iron tablets. The best way to prevent anaemia is to eat a well balanced diet containing plenty of green, leafy vegetables and red meat.