Skip to content
Home/Birth/Labour and Birth/Birth Articles/Pushed: The Painful Truth about Childbirth and Modern Maternity Care by Jennifer Block

Pushed: The Painful Truth about Childbirth and Modern Maternity Care by Jennifer Block 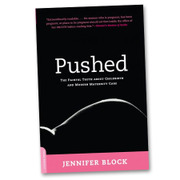 Jennifer Block seems at first to be an unlikely person to write an expose on maternity care in the USA; after all she was the former editor of Ms Magazine. It soon becomes obvious that she is masterful at her craft and is the right woman for the job. This is not just another collection of statistics and complaints; it is a jolt up your spine.

Pushed is a voyage of discovery into why and how childbirth has become so medicalised in the USA. The book is filled with stories, interviews and observations. These have been woven into an explanation of why women are handing their bodies over when it comes to childbirth. You are left in no doubt that Jennifer Block thinks midwives should be a major part of the solution to this over medicalised system, yet it is depressing to read how laws have essentially criminalized or severely restricted the practice of midwives, forcing them underground in many states. Jennifer travels with an underground midwife as she carries out her work and interviews other midwives who have been dragged through the court system.

I found most horrifying the stories of women running down back steps to avoid repeat caesareans because many hospitals will not allow VBAC any longer. From sheriffs arresting women labouring at home, to husbands handcuffing themselves to their wife’s bed, I had to check this was really 2007 she was talking about and not 100 years ago.  You will gasp at the things said in interviews with obstetricians and feel downright angry at the way maternity health policy has been essentially hijacked by doctors, lawyers and insurance companies.

Jennifer also challenges feminists to take childbirth up as a significant women’s rights issue and questions their historical neglect on this issue. Block fills the book with startling facts, such as women are 70% more likely to die in childbirth in the USA than in Europe, and how the USA ranks near the bottom amongst industrialised countries in maternal and infant mortality. This is despite the fact (or because of it) that the USA has the most intense, expensive and widespread medical management of birth in the world.

Jennifer Block is a remarkable storyteller and this makes Pushed a riveting read. It is a must for midwives or anyone involved in women’s health. But I warn you; you will need a stiff drink afterwards!