The First Time I Met You

In November 2009 when my oldest daughter was five years old and in her last year of daycare, the children in her class became interested in birth. The teachers, seeing a chance to explore this with them, asked the parents to write about the first time they had met their child. The aim was to make a book the children could share, filled with stories that were all about them. While most of the stories were about birth itself, Finlay’s story was unique. It told of the first time I met her, long before her birth, and of all the meetings that came after until she was finally born and I could look into her eyes for the very first time – it is the story of my daughter’s two-year journey to birth through IVF.

Remembering When Finlay Joined Our Family The first time I met Finlay I couldn’t actually see her. I was in a special room in a hospital called an embryology laboratory. A special kind of scientist called an embryologist showed me a little dish with my name on it. She told me that there were three embryos in the dish that would be frozen in a special freezer called a cryopreserver. They were six days old. I told the tiny embryos ‘Please hold on little ones. I so want to meet you again.’

The first time I saw Finlay she was still a microscopic embryo lying in a little dish in a hospital laboratory. The three embryos had been thawed after being in the cryopreserver for almost a year. The embryo in the dish was the only one that had survived the thaw. I looked at the embryo through a microscope. It looked like a big bubble with lots of little bubbles inside. There was a little crack in the side of the big bubble and one of the little bubbles had started pushing its way out. The scientist told me the soft shell of the embryo was breaking – the embryo was hatching! I told the embryo ‘Please hold on little one. I so want to meet you again.’

The first time I saw Finlay without a microscope was on a huge screen in a hospital using a special kind of scanning machine called an Ultrasound. She looked like a little seed and in real life was no bigger than a Tic-Tac. We could not see her arms or legs because she had only been growing 6 weeks and they were still just little buds on her forming body. But we could see a little line running across the screen and jumping up every second – blip, blip, blip. This was Finlay’s nice, strong heartbeat. I told the tiny forming baby ‘Please hold on little one. I so want to meet you again.’

The first time I saw Finlay move was on the same huge Ultrasound screen. Finlay had been growing for 13 weeks now. We could see arms and legs, a body and head, fingers and toes. I saw her again on the same screen at 20 weeks. This time Finlay kept hiding her face from us, turning away from the scanning waves. We had to go for a walk to encourage Fin to move to a better position. When we came back we could see her better. We found out that her heart and lungs were strong and correctly formed. We also found out she was a girl. I told the baby girl ‘Please hold on little one. I so want to meet you again.’ 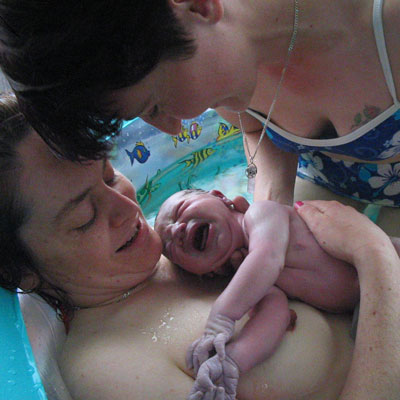 The first time I met Finlay away from little dishes and big screens and scientists and laboratories was in my dining room. She was being born. I had filled up a big plastic paddling pool with water and her birth mother and I were in it. First I saw her head and felt her soft, black hair. Then her head was out and one little hand that shouldn’t have been there just yet. I felt for her umbilical cord and found it was looped around her neck. I had to gentle pull the loop up over her head before she could finish being born.

From the very first time I met her until I held her in my arms, almost two years had gone by. Finlay is and always will be the most precious and utterly priceless gift I have ever been given.